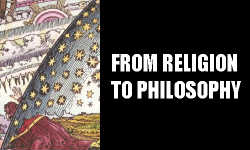 I was raised as a Christian. As a boy, I went to a Wesleyan Methodist Church, where I was active in Sunday School, Christian Youth Crusaders, and Vacation Bible School. The Bible story that made the biggest impact on me was that of Solomon. In the story, God offers Solomon whatever he wants, and Solomon chooses wisdom. I took that to heart and also sought after wisdom. In Sunday School, I actually wanted to read the Bible in depth and learn what it was about. But instead of doing this, our Sunday School teacher would ask us to memorize isolated Bible verses. This seemed pointless to me, since it didn’t further understanding of the Bible. So I didn’t bother with it. I was also confused by the Sunday School teacher telling us to witness. As a child, I was still learning about Christianity, and I wasn’t prepared to start telling people about it as though I were some kind of authority on it.

When I was in sixth grade, my Sunday School teacher pulled me aside and ask me why I wasn’t a Christian. I thought this was the stupidest, most hypocritical thing she could ask me, since I considered myself a better Christian than anyone else in my class. I was better behaved than the other kids, and I had a stronger interest in studying the Bible. After this, I regarded the church as full of hypocrisy, stopped believing in Christianity, and stayed home on Sunday mornings watching Star Trek while the rest of my family attended church.

On hearing about this, my very religious aunt sent me a package of Chick tracts and Crusaders comics. These introduced the ideas that creationism made more sense than evolution and that Bible prophecies had come true. I also looked at corroborating evidence, such as Evolution? The Fossils Say No! by Duane T. Gish and the The Late Great Planet Earth by Hal Lindsey. And I read Escape from Witchcraft by Roberta Blankenship, the autobiography of an ex-witch who got exorcised by a Baptist minister. With this evidence backing up belief in Christianity, I became a Christian again, and I started attending the First Baptist Church my parents had since switched to. So, from 8th through 12th grades, I attended this church and was active in youth group.

Although Jack Chick was a fundamentalist, and I was also watching Jerry Falwell and Herbert W. Armstrong on TV, I was attending a liberal church. It was specifically an American Baptist church, and I learned from the minister that American Baptists had a free soul doctrine, whereby members were allowed room to form their own beliefs without being expected to conform their beliefs to a fixed creed. This gave me the freedom to start investigating other religions. I knew there were other religions, and I wanted to know what the differences were from mine. Early on, I had wanted to know the difference between Protestants and Catholics. In high school, I started to take more of an interest in world religions. I became aware that members of other religions could be good people without being Christians, and this led me to question the idea I had picked up mainly from Jack Chick that unbelievers would go to Hell. I also found some hints of greater tolerance toward unbelievers in The Last Battle by C. S. Lewis. So I started leaning toward Universalism, and this freed me to study other religions.

While still considering myself a Christian, I finally decided I would read the Bible. After all, it was supposed to be God’s word, as Jack Chick would frequently emphasize in his tracts and comics. I started with the four Gospels in the King James Version. When I read these, I found many contradictions between them, and this led me to realize that the Bible could not possibly be God’s word. This was the main thing that broke me away from Christianity.

In college, I began to take courses in philosophy, and I eventually graduated with a degree in Philosophy. In reading and discussing philosophy, I found people providing reasons and logical arguments for their beliefs, and I took to this much more readily than I ever did to memorizing Bible verses. I always wanted to know why people believed things, and I was never satisfied with just being told what to believe. While preparing for a course in Oriental Philosophy, I spent the summer reading books on eastern religion, including The Tao of Pooh, The Tao of Physics, The Dancing Wu Li Masters, The Perennial Philosophy, The Sermon on the Mount According to Vedanta, and various introductory titles by Alan Watts, among others. While taking a Philosophy of Religion course, I read an excerpt from Nietzsche in which a madman declared that God was dead. Wondering what this could mean, I read a lot more Nietzsche. In the same course, I was introduced to arguments for the existence of God, and I found them all unconvincing.

Another important course I took in college was Anthropology 101. This course focused on evolution, and it led me to realize that evolution made perfect sense. This was one of the final nails in my belief in Christianity. Knowing that the Bible had contradictions, that evolution made sense, that no arguments for God’s existence actually worked, that other religions had good ideas in them, and being aware of philosophical criticisms of Christianity from the likes of Nietzsche, Bertrand Russell1, and others, I no longer considered myself a Christian. What I considered myself instead was a philosopher, which in the original Greek means lover of wisdom.