This is an educational JavaScript program for training your ability to recognize valid categorical syllogisms. All syllogisms are randomly generated, and most are silly, surreal, or nonsensical. Randomly generated statements might sometimes seem offensive, but no offense is intended. Page down for instructions and additional information.

They are illustrated above in a pattern called the square of opposition. Universal forms appear at the top, existential forms at the bottom. Universal statements merely express relations between categories without asserting that they have any members. Existential statements assert that something actually exists. Because of this, an existential conclusion will not validly follow when the only premises are universal. This would commit the Existential Fallacy. Positive forms appear on the left side, and negative forms appear on the right. A positive statement positively asserts something about its subject, and a negative statement denies something about its subject. With categorical statements, what is asserted or denied is inclusion of the subject in the predicate category. When both premises are negative, there is no connection between them, making the syllogism invalid. This commits the Fallacy of Exclusive Premises. When either premise is negative, only a negative conclusion can logically follow. When a syllogism has a positive conclusion when one of the premises is negative, it commits the Fallacy of Drawing an Affirmative Conclusion from a Negative Premise. One more thing to note about the square of opposition is that statements in opposite corners contradict each other if the subject and predicate are the same. For example, "All cats are mammals" contradicts "Some cats are not mammals," and "Some cats are mothers" contradicts "No cats are mothers." This is why it gets the name square of opposition.

A valid syllogism is merely one whose conclusion logically follows from its premises. It can be valid without having true premises or a true conclusion. An argument is sound when it is valid, and its premises are all true. In that case, its conclusion must be true. Validity is worth knowing about, because it helps us find out what logically follows from our premises, but it is not the whole picture. To emphasize the difference between a valid argument and a sound argument, all premises and conclusions are randomly generated, such that many will be false. Very few of the randomly generated syllogisms will be sound, but a fair number will be valid.

Identifying the mood and figure of a syllogism can come in handy if you have memorized which ones are valid. Although there are 256 combinations of syllogism mood and figure, only 15 are actually valid. You will find them listed here, and the same 15 are calculated here by some JavaScript:

Here are some hints on memorizing them. Old MacDonald had a farm, e-i-e-i-o. All the EIO forms are valid. This is due in part to E and I statements being completely symmetrical. No S is P means the same as No P is S, and Some S is P means the same as Some P is S. Since major and minor terms have fixed places in the conclusion, and their positions in the premises don't change the meanings of the premises, changing the figure of an EIO mood syllogism doesn't change the argument being made. Every other valid form includes an A statement with the other two being the same as each other. AAA-1 is first, it is the only one with its form, and it is the only one where the conclusion is an A statement. Even starts with E, and only the AEE forms with even figures are valid. I is the Roman numeral 1, which is odd, and only the odd figures are valid for the AII form. A and E appear alphabetically before I and O, and for EAE, only the first two figures are valid. While the first two figures of EAE are valid, it is the last two figures of IAI that are valid. Finally, OAO-3 is the last valid form. The only valid form beginning with a O ends with an O, and three is the number of statements in a syllogism. If you've seen the TV series Lexx

, you may remember the Brunnen-G song Yo Way Yo, which sounds like OAO.

For each syllogism, fill in the fields for mood, figure, validity, and fallacies. When you're finished, press "Check Answers" to find out what the correct answers are. Press "New Syllogism" to do a new syllogism.

The first premise in a categorical syllogism

The second premise in a categorical syllogism

The category mentioned in both premises but not the conclusion. It is what links major term and minor term together in the syllogism.

The figure of a categorical syllogism is the position of its major, minor, and middle terms. There are four figures. The major and minor terms have standard positions in the conclusion, which are the same for all figures. Each figure is disinguished by the placement of the middle term.

A mistake in reasoning which makes an argument invalid.

Fallacy of the Undistributed Middle

When neither premise refers to every member of the middle term, the middle term fails to connect the two premises, and nothing can follow from them. This makes the argument invalid.

Fallacy of Illicit Process of the Major Term

Fallacy of Illicit Process of the Minor Term

When both premises are negative (E or O), there is no connection between them, and nothing follows from them. This makes the argument invalid.

Fallacy of Drawing an Affirmative Conclusion from a Negative Premise

Since getting a plug-in that allows JavaScript on a page, I put it on my blog, then corrected a typo, fixed it to clear all fields when "New Syllogism" is pressed, and added a few more terms. 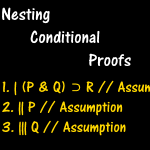 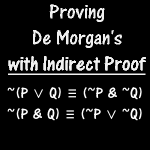