This video begins a series on the rules of inference, which are deductively valid argument forms. This video covers the rules of conjunction, simplification, addition, and disjunctive syllogism.

This video introduces the concept of formal validity. This is deductive validity that depends only on the form of an argument. So, any argument with the same form as a formally valid argument is also valid, even if the content of the premises is completely different. The rules of inference are all valid argument forms. So, any argument using a rule of inference as its form is deductively valid.

The rules of conjunction and simplification use the & sign. This means AND, and where p and q are each propositions, p & q means that p and q are both true, or, which is the same thing, that the conjunction of them is true.

The rule of conjunction goes from two propositions to their conjunction:

The rule of simplification lets you infer a single proposition from the conjunction of two propositions:

The rule of addition lets you infer a disjunction from a single proposition. As long as the proposition is true, any disjunction with it will also be true. So it doesn’t matter what the new disjunct is. 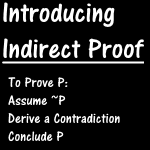 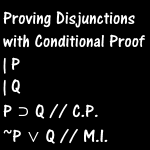