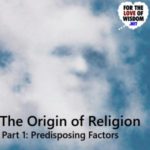 The Origin of Religion: Predisposing Factors