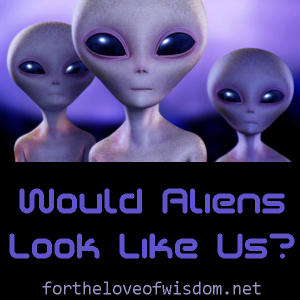 In commemoration of the anniversary of the Moon landing, I wanted to do something space-related. So this will be about the question of whether aliens would look like us.

Since alien life may evolve on worlds very different from ours, there is sure to be a wide variety of alien life that looks different than us. Besides that, terrestrial life is itself very diverse. So it’s to be expected that a lot of extraterrestrial life would appear unusual. But when I ask whether aliens would look like us, what I really mean are the sentient aliens who can get off-world and come here. This narrows down the field from what alien fauna we might find if we traveled to other worlds.

Bear in mind that I am not saying that any aliens have actually visited earth. I know there are various reports of close encounters with extra-terrestrials, but none have ever officially contacted earth people in general, and none have ever contacted me personally. So I remain unconvinced of the idea that extraterrestrials are visiting earth. One argument against the idea that aliens are visiting earth is that reports of aliens usually describe them as humanoid or even sometimes as almost passing for human beings. This may seem fishy to people who, knowing that aliens would have evolved on other planets with different environments, would expect them to look very different from us.

So let’s think about what we should expect from any sentient aliens who could visit earth. First of all, these aliens would need to be capable of building spacecraft. Even if they eventually use something better than rocket technology, it’s reasonable that their development of space craft would go through a phase of rocket technology. For that to happen, they would need to use fire. For fire to be available, they would need an atmosphere with oxygen in it. It’s unlikely that a planet would just happen to have an atmosphere rich in oxygen without photosynthesis going on. What would be most likely is that plant life capable of photosynthesis evolved on their planet, eventually producing so much oxygen that the plants would start dying off unless animals capable of breathing in oxygen and breathing out carbon dioxide evolved. Why carbon dioxide rather than silicon dioxide? As has been speculated, perhaps some aliens are silicon-based. On earth at least, silicon dioxide is normally a solid, not a gas. Also, oxygen is needed by our bodies to burn calories. This works for carbon-based lifeforms like us, because carbon can burn under typical terrestrial conditions. While silicon can also burn, it normally does so in stars with a minimum of about 8–11 solar masses. So it seems unlikely that a silicon-based lifeform could use oxygen to burn silicon sources of food. It’s much more likely that oxygen-breathers would be carbon based, and since the plants would be their evolutionary cousins, that the plants would be carbon-based too. Besides that, carbon-based plant life would initially provide the most useful material for burning with fire. Being fire-users, they would also have to be land animals, since fires don’t start well under water. So, based on them needing to be fire users, we can conclude that they would at least be carbon-based, oxygen-breathing, land animals.

Besides being fire-users, they would have to be tool-users. After all, spaceships are large, complex tools that are built with other tools. To be tool users, they would need appendages capable of being used to manipulate objects. Since evolution doesn’t just build in new things when they could come in handy, their manipulative appendages would have probably evolved from something previously used for locomotion. So what would their ancestors have most likely used for locomotion? Could they have evolved wheels? Probably not. Wheels require a smooth surface, and their ancestors would have probably lived in vegetation-covered areas that would not be easily accessible to wheeled animals. Besides that, a planet where controlled use of fire is possible would probably be in the right temperature range to support liquid water, life would have probably begun in water, where wheels would have been even more useless. So their ancestors would have likely used legs for locomotion. How many legs might they have had? While reptiles and mammals usually have four legs, insects have six, and spiders have eight. Insects and spiders normally move around different kinds of environments than reptiles and mammals. Their extra legs may help them climb vertical surfaces, or in spider’s case, crawl around on a web. Their legs are useful for small, light animals who do a lot of climbing. But it seems unlikely that insect-like animals would become sophisticated tool users. Tool-use would be more likely for large animals who roam the land. For roaming the land, four legs is probably optimal. Like a table normally has four legs, four legs is all an animal needs to stand upright without tipping over, extra legs would probably not increase an animal’s speed that much, and they would require more coordination to prevent an animal from tripping over his legs at high speeds. Since bipedalism is possible, a four-legged animal could eventually evolve to use its front legs as arms and hands. If an animal began with fewer than four limbs, then it might not have any to spare for evolution into arms and legs. While an animal was running on four legs, it would need to be aware of where it was going. So, it would need eyes in the front of its body. Two eyes would be optimal, since this would allow for depth perception. Since it breathes oxygen, it would likely consume plant or animal matter, and the most effective place for a food grabbing hole would also be the front of the body. So it would likely have a head with eyes and a mouth. Therefore, a tool-using, fire-using alien would likely be a humanoid who uses hind legs for walking but has evolved the front legs into arms and hands for tool manipulation.

Besides using fire and tools, such an alien would have to be capable of civilization. Individual animals don’t just make spaceships on their own. This is a huge project that requires scientists to figure out how a spaceship would work, engineers to design it, and workers to build it. Cooperation of this sort would require language. Since these would be land-dwelling air breathers on a planet within a temperature range for controlled fire and liquid water, it’s very likely that sound would become a medium of communication. They would likely be capable of speech through the equipment they use for breathing, and they would likely have ears for hearing. Two ears would be optimal, since they would allow for locating direction. So, intelligent extraterrestrials capable of building spaceships would probably be land-dwelling humanoids with heads that have eyes, ears, and a mouth. Although alien life could take many other forms, it’s unlikely that these other forms would build spaceships that can reach other planets. So, if aliens are visiting earth, it is very likely that they are humanoids like us, and we should not consider reports of humanoid aliens as evidence that they are just products of limited human imagination.

Although they may resemble us, I wouldn’t expect them to be able to mate with human beings. Parallel evolution may lead them to have some of the main features as us, but their DNA, if that was even what life on their planet was based on, would likely be too different from ours. For all we know, life on other planets could be based on something other than DNA. Parallel evolution means that similar selective forces would lead to phenotypic similarities, but it is no guarantee of genetic similarity. The idea found in popular science fiction, such as comic books or Star Trek, that humans and aliens can have children together is most unlikely. And even if aliens could pass for humans on the street, it’s unlikely that they could fool a doctor during a medical examination. So while I do believe parallel evolution would make any aliens who could get off-world very similar to us, it wouldn’t go all the way and make them just like us. 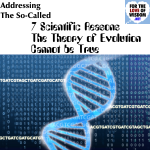 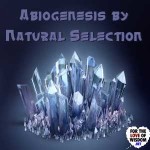