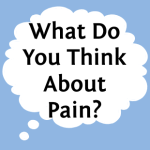 This is the first in a series in which I ask you a question and present some ideas on the subject from various philosophers. The question today is about pain. More exposition can be found in the video. This post mainly lists my notes and gives you links to some sources.

David Benatar has written a book called Better Never to Have Been: The Harm of Coming into Existence

, in which he argues that pain is so bad, it is better to never be born than to suffer pain. And it is not just severe pain. He is so much against pain, he would rather the whole human race go extinct than for people to continue being born to lives of suffering. He believes it is a harm for anyone to be born, because that condemns a person to a life with pain and suffering in it.

“Joy is not real, nor pain either. Tao would not be Tao, were you able to picture it to yourself as pain, as joy, as happiness or unhappiness; for Tao is One Whole, and in it no discords may exist.” Interpreting Taoism by Henri Borel. From Tao Te Ching Ultimate Collection.

Here are some relevant excerpts from a story in which Hercules meets two larger-than-life women who are personifications of different lifestyles. Links are provided for reading the entire story.

The first woman says, “If you will choose me for your Friend, I will lead you to that which is the most easy, and the most agreeable. You shall taste all the Pleasure of Life in it; and be free from all its Cares and Troubles.”
– The Choice of Hercules: A Lesson of Socrates; recorded by Xenophon. Translated by Rev. Joseph Spence.

The second woman tells him, “There is nothing truly valuable which can be purchased without pains and labour.” The Memorable Thoughts of Socrates

“To those human beings who are of any concern to me I wish suffering, desolation, sickness, ill-treatment, indignities — I wish that they should not remain unfamiliar with profound self-contempt, the torture of self-mistrust, the wretchedness of the vanquished: I have no pity for them, because I wish them the only thing that can prove today whether one is worth anything or not — that one endures.”
– Friedrich Nietzsche, The Will to Power

“From tragedy Nietzsche learns that one can affirm life as sublime, beautiful, and joyous in spite of all suffering and cruelty.” – Walter Kaufmann from the “Translator’s Introduction” to The Birth of Tragedy.

“pain begets joy … ecstasy may wring sounds of agony from us.” – Nietzsche, The Birth of Tragedy.

“Zarathustra suffers, not humbly and in agony, but proudly and with challenge. … If one is to accomplish the status of overman, one must suffer in the way Zarathustra suffers, i.e., gladly and proudly. One should not suffer as an acscetic, as if suffering were the punishment for sins, but gladly, in the realization that suffering wakens in one hitherto unrealized dimensions of self-awareness and hence of self-pride and joy. Suffering thus done does not humiliate, it enobles.” – Michael Gelven, Winter, Friendship and Guilt: Sources of Self-inquiry (Torchbooks)

Let me know in the comments below (or on YouTube) what you think about pain. 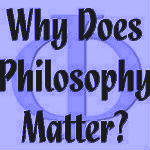 Why Does Philosophy Matter?