For the past 14 lessons, we have been focused on sentential logic. This is where we use single letters in place of whole sentences and focus on the logical relations made between whole claims. But an argument can be valid without there being logical relations between whole sentences. Watch the video or read the text below. Although they cover the same subject, they do not cover it in exactly the same way. So going over both may help you learn the subject better.

This argument is valid, but using sentential logic, we would symbolize it something like P for All calicos are felines, Q for Holly is a calico, and R for Holly is a feline. Using sentential logic, there is no logical reason why R would follow from P and Q. Using predicate logic, we can symbolize the content of our sentences, and this will let us prove the validity of this argument.

First of all, predicate logic lets us use separate symbols for the subject and the predicate of a sentence. Using predicate logic, we can symbolize Holly is a calico as Hc and Holly is a feline as Fc. In each of these, the predicate is represented by a capital letter that comes first, and the subject is represented by a lowercase letter that comes second. But what about All calicos are felines? Perhaps you're thinking that we could translate this as If Holly is a calico, then Holly is a feline, which we would symbolize as Hc ⊃ Fc. Then with that, we could use sentential logic to prove the argument's validity. But the sentence All calicos are felines doesn't even mention Holly. Instead of twisting a sentence to say something it doesn't, we will turn to predicate logic for a new way to symbolize it.

So how will we do that? What this is saying is that for anything at all, if it is a calico, then it is a feline. It will be represented by a conditional, but how will we represent the subject in that conditional? Instead of naming a particular subject, it applies to every subject. So instead of using a constant to represent our subject, we will use a variable. What "All calicos are felines" means is "For any subject x, (Cx ⊃ Fx)". We will represent "for any subject" with an up-side down A and symbolize the whole sentence like this:

You may read this as "For each x, if Cx, then Fx." The ∀ symbol can be written in HTML as "&forall;". This symbol is called the universal quantifier, and it means that in the sentence where its variable is used, it is true for every subject. The parentheses around the conditional indicate the scope of the universal quantifier. It tells us that both Cx and Fx belong to the scope of the quantifier. Without the parentheses, (∀x)Cx ⊃ Fx would read "If everything is a calico, then x is a feline." Here, the x in "x is a feline" would be a variable without a value, making the expression meaningless.

Fx won't say anything meaningful until the x is replaced with a particular subject. There are two ways of doing this. One is to just replace the x with a named subject, such as Fh for "Holly is a feline." The other way is to bind it to a quantifier. (∀x)(Cx ⊃ Fx) says that for any subject, (Cx ⊃ Fx) will be true.

In order to prove the validity of this argument, we will need a rule that lets us go from a universal claim to one about a particular individual. This is the rule of Universal Instantiation. It lets us go from a universal statement expressed with propositional functions bound to a quantified variable to propositions about particular individuals. It is like a computer function that takes a placeholder name, a template and a subject as parameters and returns a proposition. It might look like this in computer code:

To universally instantiate (∀x)(Cx ⊃ Fx) to Holly, we could use a line of code like this:

Ideally, if I were writing actual code for this, the UI function would be written to recognize propositional functions, but this is for the purpose of illustration, and I don't want to lose the audience by making things too complicated.

Now that we know how to symbolize each premise of the argument, and we know about the rule of universal instantiation, let's put it all together and prove this argument's validity.

No, this means everything is mortal. When we refer to everyone, we normally mean something like all people or all humans. So everyone is mortal might better be symbolized like one of these:

To recap, the rule of Universal Instantiation lets us infer a specific instance of a generalization. When we use it, we replace every occurrence of its placeholder (the variable that is bound to the universal expression) with a label for a particular subject and drop the quantifier. As long as we assume a universe with at least one subject in it, Universal Instantiation is always valid. Since you couldn't exist in a universe with any fewer than one subject in it, it's safe to make this assumption whenever you use this rule. So, for all practical purposes, it has no restrictions on it. You can use it to instantiate a universal statement to any subject you like, so long as that subject actually exists. 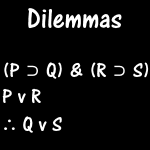 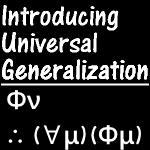