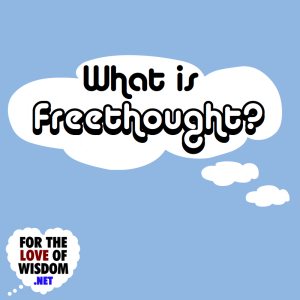 Religion has a history of enforcing conformity of thought. During the Inquisition, people were arrested, tortured, and killed for the so-called crime of heresy. In many Muslim countries today, people are being killed for being Christians or atheists. In its most basic form, freethought is a rejection of this tyranny of the mind. As Chapman Cohen puts it in A Grammar of Freethought,

Freethought is that form of thinking that proceeds along lines of its own determining, rather than along lines that are laid down by authority. (Kindle loc. 433)

Why Not Let an Authority Think For You?

But why should it be important to direct our own thinking? Why not accept the convenience of turning our thinking over to a third party and just being told what to think?

One popular way of abandoning the responsibility to think for yourself is to submit your mind to the authority of God. This is tempting, because God is supposed to be all-knowing and all-wise. So, who better to do your thinking for you? The problem with this is the reality of how it works. People cannot just download infallible information from the mind of God. The wide variety of different religious beliefs is a good indication that this is not happening. Most people end up relying on other people, known as clergy, or on written manuscripts, known as scriptures.

Regardless of what can be said about individual clergy or scriptures, they are second-hand sources at best. If God were speaking to you directly, you wouldn’t need to rely on them. They are there as substitutes for direct communication with God. But if you need to rely on their authority rather than on the direct authority of God, how can you know which clergy or which scriptures to follow?

Which clergy have the authority to speak for God? Is it the Pope, Cardinals, Bishops, Priests and Nuns of the Catholic Church? Is it ministers, pastors, or priests of some particular Protestant denomination? Is it the Governing Body or elders of the Jehovah’s Witnesses? Is it a Muslim imam? Is it some Indian guru? With so many different people claiming to speak for God, it would be irresponsible to just fall in line with one of them. If you can’t rely on God to tell you who his representatives are, then you will have to rely on your own reason and judgment.

While there are fewer of them, the same goes for scriptures. Which ones should you accept as God’s word? Different religions have different scriptures, such as the Bhagavad Gita, the Bible, the Qur’an, the Book of Mormon, the Avesta, and others. The most popular of these is the Bible, which is a collection of 66 books accepted as canon. Besides these, there are various other apocryphal books claiming to be Jewish or Christian scriptures. How can you know which scriptures to trust as God’s word when there are so many?

Whether you’re picking clergy or scriptures, it would be circular reasoning to rely on any of them when choosing which to follow. So, even the person who chooses to submit to the will of God bears the responsibility of using his own mind to make the right choice. To make a random choice, or to blindly follow the religious leaders or scriptures you were brought up to follow, is to abandon all responsibility to think for yourself. But even in abandoning this responsibility, you do still bear it.

Many Alleged Authorities are Wrong

The second problem is that all too many authorities are wrong about numerous things, and turning your mind over to them would be intellectual suicide. Most religious authorities teach things that cannot be verified by science or observation, such as the existence of angels, demons, djinn, astounding miracles, etc.

They also frequently teach that the most important thing you can do in life is make yourself right with some invisible authority who will reward or punish you after you die. There is no empirical evidence that such an authority exists, and if there is no such authority or you choose the wrong one, you could end making your life unbearable by trying to live up this authority’s demands. And this is often no easy task. Muslim women are often expected to live in submission to their husbands and to cover themselves up in burkas and hajibs. Jehovah’s Witnesses have to attend long, boring meetings filled with regurgitating what they read in Watchtower magazine, and spend many hours going door-to-door trying to sell other people on the drivel they are taught to believe.

Believers who take their religions very literally find themselves at war with science and reason. Many people of many religions are taught to feel ashamed of their sexual feelings and to berate themselves for having normal human urges. And authoritarian religious belief systems often declare it a sin to question them, leading many believers with legitimate questions feeling guilty for using their own minds. For some, turning their minds over to an external authority is even physical suicide, such as Jehovah’s Witnesses who refuse blood transfusions, Christian Scientists who rely on faith healing, or Muslims who die waging jihad.

Many Authorities are Self-Serving

A third problem is that many so-called authorities are just organizations, meme-complexes, or liars that act more in favor of their continued existence than in the search for truth. Take the Watchtower Bible and Tract Society, for instance. This is a publishing company that routinely sells phony religious literature to people it treats as slaves. It claims to be God’s true organization and representative on earth, yet over the course of its existence, it has published conflicting claims, using the concept of new light to justify coming out with something new. Among other things, it has predicted the immanent end of the world multiple times, and the dates it has predicted have always been wrong. This organization does not exist for the sake of its members; it exists to exploit and feed off its members.

Many other religions tend to be free-floating meme complexes that continue their existence by being taught to the next generation by the previous, and by keeping members in fear of leaving by making it a punishable sin to doubt the religion. There are also plenty of conmen in religion who use it to fleece people of their money. If you’re going to turn your thinking over to a third party, you should choose one that seeks truth itself and will never exploit you.

And that brings us to a Catch-22. The real truth seekers, the ones who will not exploit you, are freethinkers, and as freethinkers, they accept the responsibility of thinking for themselves, and they will tell you that you should think for yourself too. Those who want to tell you what to think are those who want to control you. It is always in your best interest to think for yourself instead of turning your mind over to them.

Besides freeing you from control by those who would exploit you, thinking for yourself helps you ground your beliefs better. Consider this parable from Matthew 7:24-27. I mention it, because I think it can be used to make a good point, not because I consider Jesus to be an authority.

Although the application of the parable is questionable, the idea behind the parable is a good one. Let me reframe it terms of knowledge. A wise man, seeking to know what is true, built a firm foundation for his knowledge by trying to understand why anything he was told should be true, by rigorously testing claims, and by rejecting any that do not stand up. By doing do, he was able to build up an edifice of knowledge that all made sense and fit the observed facts. But a foolish man accepted what he was told on faith without understanding why any of it should be true. As a result, he came to believe many fabulous things that had no basis in reality.

When facts started piling up, the wise man took it in stride, ready to learn new things. Since his knowledge already had a solid foundation, it was just a matter of fitting new facts into what he already knew. But the fool started panicking, declaring that the facts must be wrong, or that reason is bankrupt, or that science is of the devil. As facts flooded around him, and reality beat against his beliefs, he tried to pull away from reality to protect his cherished beliefs. Eventually, his beliefs collapsed like a house of cards.

By thinking for yourself, you can pick only beliefs that make sense to you and arrange them in a way that is logical and consistent. Ultimately, freethought is about relying on the powers of your own mind to figure out the world rather than simply letting someone else tell you what to think. This includes using reason and critical thinking to evaluate truth claims. While some may misconceive of freethought as the freedom to think whatever nonsense you please, freethought is really a commitment to seeking the truth by relying on your own mind and on reliable methods, such as critical thinking and the scientific method, to best figure things out. Freethought is the virtue that stands opposed to faith. It is the acceptance of a responsibility that everyone bears but few take up. 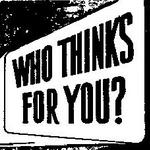 Who Thinks for You? Awake! Article on Propaganda from 1947