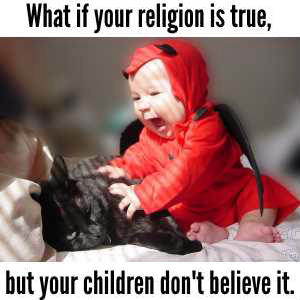 This video has been based on the article that follows after it:

Anti-natalism is the position that procreation is morally wrong, and I believe that some Christians and Muslims should be anti-natalists. Let me stress the word some here. I specifically have in mind those Christians and Muslims who believe in eternal damnation in Hell. So, this is not for Jehovah’s Witnesses, who believe that God simply neglects to resurrect unbelievers to paradise, and it does not apply to Universalists, who believe that everyone eventually goes to Heaven. I’m too unfamiliar with sects of Islam to know if there are any that don’t believe in Hell, but if there are any, this doesn’t apply to them. Eternal damnation in Hell, if it can happen at all, is the worst thing that can happen to someone. It means being condemned to constant torture and torment forever. If it is true of anyone, it is true that people who go to Hell would have been better off never having been born. If you have a child who goes to Hell, it would have been better if you had never had that child. Of course, you may be saying, "My children won’t go to Hell." But how can you guarantee that? Children of both Christians and Muslims have been known to fall into sin or to convert to other beliefs. That could very well happen to your children.

I have an aunt who was so religious, she named her only child Christian. When I stopped attending church at the age of ten, she sent me a box of Chick tracts and Crusaders comics by Jack Chick. These often portrayed people going to Hell for turning away from Jesus. One day in 2010, my cousin Christian shot himself dead. If Jack Chick’s comics and tracts accurately portrayed reality, my cousin Christian is very likely burning in Hell now and will for the rest of eternity. I should add that I don’t personally believe in Hell, as I have explained in There is no Eternal Damnation in Hell, and I don’t believe this was his fate. But, judging by the materials my aunt once sent me, she did believe in Hell, and despite her best intentions, my cousin Christian did not live a holy Christian life.

Fred Phelps dedicated his life to warning people about Hell, and he founded the Westboro Baptist Church, made up mostly of his family members. He and his church are well known for picketing places with signs like "God hates fags," "God is your enemy," and "You’re going to Hell." If any parent was concerned about Hell and wanted to keep his children from going there, it was Fred Phelps. Yet his own son Nathan turned away from the Westboro Baptist Church and became an atheist. Nathan’s sister Shirley has said

Nathan Phelps is a rebel against God. He has nothing to look forward to except sorrow, misery, death and hell…He spit on the goodness of his mother and father. In spite of that, his father and mother loved him and did their duty to him…and required of him that he behave while he lived in their house. They loved him in the only way that the Lord God defines love! They told him the truth about what the Lord his God required of him. He was not going to have that!1

So, if Fred Phelps was a true spokesman for God, his own son Nathan is headed to Hell.

Ayaan Hirsi Magan was brought up as a Muslim. Both of her parents were devout Muslims who wanted her to be a good Muslim too. But her father’s influence on her life was curtailed. When she was very young, he was imprisoned for opposing the communist government of Somalia. Although he returned to his family while she was still a girl, his ideas about Islam didn’t align with what her mother had been teaching her, which undermined the instruction her mother had been giving her. Also, conflicts between her parents eventually split them up, so that she was mainly raised by her mother. If her father had taken a direct hand in raising her, maybe she would have remained a submissive Muslim woman. Instead, she became an infidel. She fled to Holland, changed her name to Ayaan Hirsi Ali, adopted secular values, and after 9/11, renounced Islam. The Qur’an describes the tortures of Hell in detail. If Islam is true, Ayaan Hirsi Ali is on her way to Hell.

These are not just isolated cases. Many nonbelievers are former Christians or Muslims. Matt Dillahunty of the Atheist Experience public access program was studying to become a Christian minister before he became an atheist. The atheist YouTubers Jaclyn Glenn and MrRepzion both started their YouTube careers as Christians. I myself used to be a Christian. There are also people who switch faiths. Ayaan Hirsi Ali, who was raised as a Sunni Muslim, reports that one of her teachers became a Shia Muslim when she married a Shia man. The Muslim YouTuber DawahFilms used to be a Christian. There have been numerous conversions from Islam to Christianity and vice versa. The Acts17Apologetics YouTube channel sometimes features testimonials from people who have converted from Islam to Christianity, and there are Muslim channels that feature testimonials from people who converted from Christianity to Islam. Also, many Christians have changed denominations. So, it can be very difficult for parents who believe in Hell to keep their children on what they believe will be the true path.

Let’s also consider that parents will normally die before their children. Once you’re dead, you can’t do anything more to make sure your children follow the one true path that will keep them out of Hell. And even if you do save your children, they may have children of their own, who may have more children, and so on for countless generations. You will have no control over that, and by having one child, you could have numerous descendants who will end up in Hell. Look at the history of religion, and you will see that many people are not following the religion of their distant ancestors. In one line of my family tree, I’m descended from Methodist minsters. The senior one was followed into the ministry by his son, but neither of them had any influence on my upbringing.

In the old days, churches took an active role in preventing people from straying into heresy. For example, the Catholic Church would arrest and torture heretics, sometimes killing them. This may seem appalling by secular standards. But the Catholic Church considered the fate of the soul much more important than the fate of the body, and if a bit of temporary torture of the body could prevent a soul from falling into eternal damnation, it was considered worth it. And even if all heretics could not be saved, the ones who couldn’t served as examples to others, and killing unrepentant heretics kept them from spreading their heresy. Back during the inquisition, you stood a better chance that your children and grandchildren would remain Catholics than you do now. Nowadays, secular values have taken hold of most of the west, and torturing and killing people for heresy is now frowned upon. The Catholic Church is no longer able to enforce orthodoxy like it used to, and many Protestant denominations have popped up. While Catholics are still in the majority in most of the world, Protestants are in the majority in the United States. Furthermore, Dale McGowan reports that Catholicism has become part of many people’s cultural identity instead of remaining about beliefs.2 As he reports, many nonreligious people are now identifying themselves as Catholics. During the inquisition, these heretics would have been tortured and killed by the church. Nowadays, heresy festers in the church, and if eternal damnation in Hell is a real threat that the Catholic church could have saved its members from, it is now doing a poor job of saving them.

Although some Protestant churches persecuted heresy for a while, it never became as big a thing in Protestant circles, and no contemporary Christian churches are enforcing orthodoxy with the full authority of the state behind them. Muslims are still in on this. Shia and Sunni Muslims frequently kill each other for being the wrong kind of Muslim, and they will kill non-Muslims too. Atheism still gets the death penalty in some Muslim countries. But contemporary Muslims live in a more connected world than medieval Christians did. Attempts to enforce orthodoxy by murdering infidels meets with outrage from the west, and most of the western world serves as a haven for people who want to escape persecution for their beliefs. Consequently, it is easier for people to change beliefs than it used to be. Once you’re gone, you can’t rely on a social system that will keep your children and other descendants from discarding your beliefs in favor of new ones.

And if you believe in Hell, it’s likely that you also believe in Satan. If there is now more freedom of belief in the world, a being like Satan, who allegedly wants to lead people into eternal damnation, would be sure to take advantage of this, doing whatever he can to lure your children, grandchildren, and other descendants into eternal damnation in Hell. With heavy metal music, the occult, alternative religions, psychedelic drugs, internet porn, and scientists claiming that we’re descended from apes, there are all kinds of ways for Satan to lure people away from the truth that adhering to your particular religion is the only way to escape eternal damnation in Hell. Seriously, if Hell is real, and your religion offers the only way to escape it, any children you have will be in serious danger of fire and brimstone. The most effective way to make sure you never have any children, grandchildren, or other descendants who go to Hell is to not have children at all.

Why make babies, if by doing so you’re going to populate Hell? What if the government let you have children under the condition that they could be seized at random for seriously unethical medical experimentation? Would you still want to have children under those conditions? Hell would be much worse than random medical experimentation. The main difference is that you won’t see Hell while you’re alive. But does that mean it’s any less real? If you believe that Hell is real, wouldn’t your time be better spent trying to save the people who are already here than in making new residents of Hell? If you went to Heaven, wouldn’t you be happier knowing that you saved people from Hell than you would be knowing that your children and numerous grandchildren are burning in endless agony forever? So, if you believe in Hell, doesn’t it make sense to become an anti-natalist?

Once more, let me say that I don’t believe in Hell. The idea of eternal damnation in Hell is inconsistent with the idea of a loving God, as I have argued in There is no Eternal Damnation in Hell. But if you do believe in Hell, shouldn’t the saving of souls be more important than the making of babies? Wouldn’t it better to populate Heaven by saving souls than to populate Hell by popping out babies?


If the worst thing you can imagine is that your religion is true but your children don’t believe it, don’t have any.
Powered By the Tweet This Plugin 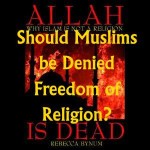 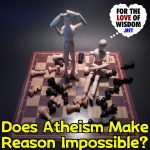