As I already explained in The Double Standard Behind Benatar’s Asymmetry Argument for Anti-Natalism, David Benatar’s asymmetry argument fails to establish anti-natalism, the position that procreation is always wrong. This argument proposes an asymmetry between pleasure and pain for those who never exist, such that the absence of pain for the never-existent is considered good, whereas the absence of pleasure is considered merely not bad, and this asymmetry is supposed to imply that coming into existence is always a harm. After making his main argument for this asymmetry, he maintains that it is the best explanation for four other asymmetries. In each case, it actually isn’t the best explanation, or the asymmetry is simply false and doesn’t need any explanation. In The Explanatory Failure of Benatar’s Asymmetry – Part 1 and in Part 2, I explained how this was so for the first and second asymmetries he brought up. In the following video and post, I explain why his asymmetry between (3) and (4) is not a good explanation for the remaining two asymmetries he claims it is the best explanation for.

Let’s begin by looking at his third asymmetry. He writes,

His explanation for this is actually one I agree with. As he explains it, we cannot feel regret for the sake of someone who has never existed, because this is someone who will never exist. As he puts it,

Where I disagree with Benatar is in thinking that this explanation depends upon his asymmetry. I could just as easily assert that we can be glad, for the sake of an indeterminate but existent person that a benefit was bestowed on him or her, but we cannot be glad, for the sake of somebody who never exists and thus cannot thereby be benefitted, that this person fails to experience some harm. My point is that what matters here is whether there is a real person who could be harmed or benefitted, and that’s the only reason we can regret something for a real person but not for someone who has never existed. His asymmetry between (3) and (4) just doesn’t factor into this.

Inasmuch as he does bring up any part of his asymmetry in his explanation, he says, The reason why we do not lament our failure to bring somebody into existence is because absent pleasures are not bad.3 This makes reference to (4) but not to (3). As I already pointed out in The Double Standard Behind Benatar’s Asymmetry Argument for Anti-Natalism, it is fully possible for someone to accept (4) without accepting (3). Using (4) to explain something is simply not the same as using an asymmetry between (3) and (4) to explain the same thing. It’s not essential to argue here that (3) is false. All I have to do is point out that the explanation Benatar gives for this asymmetry works just as well whether (3) is true or false. (4) alone does all the explanatory work, and the alleged asymmetry between (3) and (4) does none of it. So there is no logical connection between Benatar’s explanation for this asymmetry, which is one I agree with myself, and the asymmetry he asserts between (3) and (4).

For the last asymmetry he cites, he says,

Whereas, at least when we think of them, we rightly are sad for inhabitants of a foreign land whose lives are characterized by suffering, when we hear that some island is unpopulated, we are not similarly sad for the happy people who, had they existed, would have populated this island. Similarly, nobody really mourns for those who do not exist on Mars, feeling sorry for potential such beings that they cannot enjoy life. Yet, if we knew that there were sentient life on Mars but that Martians were suffering, we would regret this for them.4

This is a variation on what he just described in the third asymmetry. In each, we feel regret or sorrow for people who do actually suffer, but we don’t feel it for people who will never exist. Because they’re basically saying the same thing, the explanation he gave for the third works just as well for the fourth, and, as I already mentioned, it is fully compatible with the idea that neither the absence of pleasure nor the absence of pain has any value for the never-existent.

The way he has phrased this asymmetry, he is speaking of strong emotions, such as sorrow and mourning. But he is speaking of them in different contexts. First, he mentions that we are saddened by the suffering of people who actually exist in foreign lands, and he contrasts this with not being saddened by unpopulated islands. Then he brings up Martians and says that we do not mourn for their non-existence, and he contrasts this with feeling regret for their suffering if any Martians did exist. So he really has two asymmetries here, and it is important to keep them distinct, as he raises this objection:

In neither asymmetry has he said anything about not regretting. Where he mentions regret, he is saying we would regret the suffering of Martians if they existed. Where he mentions what people are not doing, he says they are not mourning the non-existence of Martians or they are not feeling saddened by unpopulated islands. So this objection does not actually address any of the two asymmetries Benatar has just mentioned here. Here is one that does: just as we do not mourn or feel saddened by the absent pleasures of those who could have existed, we do not take joy in the absent pain of those who could have existed.

This rephrased objection is immune to the response Benatar makes to the strawman objection he raises. He responds by saying that joy is not the appropriate contrast to regret.6 He claims that joy contrasts with melancholy, and although we feel regret over the suffering of people in distant lands, we do not normally feel melancholy over it. It is on this basis that he explains why we do not feel joy over the non-suffering of the never-existent.

In order to evaluate this, let’s consider what he contrasts regret with instead of joy. He contrasts regret with what we might call welcome or simply good7. But I don’t think that welcome and simply good are synonyms. A relief of pain can be welcome without adding anything positive. So we may say that not experiencing pain is a welcome part of never existing without describing it as positively good. Likewise, I could say that not experiencing pleasure is an unwelcome part of never existing. I consider death unwelcome, because it will be the end of my existence, even though the non-existence that follows death is not a negative thing but simply the end of something positive. So I distinguish between welcome and good and between unwelcome and bad. This provides two senses of what we might mean by regret. One is to consider it bad, and the other is to consider it unwelcome. Let’s now rephrase the asymmetry in terms of each.

First, in terms of bad, it goes nobody really feels that non-existent Martians have it bad, yet, if we knew that there were sentient life on Mars but that Martians were suffering, we would consider this bad for them. This seems to be true, and it is explained by the idea that the absence of pleasure is not bad for the never-existent. But as I’ve already mentioned, this explanation is compatible with the idea that the absence of pain has no value for the never-existent.

Second, in terms of welcome, it goes nobody really considers it an unwelcome condition of non-existence that never-existent Martians feel no pleasure, yet, if we knew that there were sentient life on Mars but that Martians were suffering, we would consider this unwelcome for them. I would question this one. I do consider it an unwelcome condition of non-existence that the never-existent feel no pleasure. It’s one of the reasons I have for not wanting to cease to exist. Also, if I were to learn that there was no other sentient life in the universe except on earth, I would consider that unwelcome news. It’s not that I have serious hopes of meeting aliens. Even if I were to learn this on my deathbed, I would consider it a worse state of affairs than it would be if other planets also harbored sentient life. So, while I am not hung up on whether Mars in particular has life, I do consider sentient life worthwhile enough that I would be pleased to learn that it existed elsewhere in the universe. 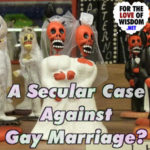 A Secular Case Against Gay Marriage? 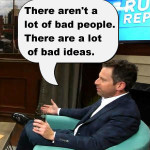