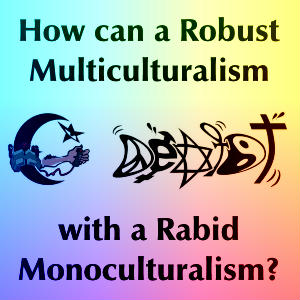 For multiculturism to survive, multiculturists have to limit their multiculturalism to cultures that all share core values that allow for their co-existence. These values include the equality of people, the worth of human life, both individually and in others, the necessity of human liberty, which includes self-determination and individuality, and the importance of human happiness. These four values of equality, life, liberty, and happiness are all expressed in the United States Declaration of Independence:

We hold these truths to be self-evident, that all men are created equal, that they are endowed by their Creator with certain unalienable Rights, that among these are Life, Liberty and the pursuit of Happiness.

The mention of a Creator is not what concerns me. This was written before the birth of Darwin, after all. But it does mention equality among people and the rights to Life, Liberty and the pursuit of Happiness. Some of these same values are expressed in the French motto of liberté, égalité, fraternité, which in English is liberty, equality, fraternity. Fraternity is about treating other people ethically out of a concern for the well-being of fellow humans, which is rooted in caring about the lives of others, which brings us back to the value of life. So, human life is not just something to be valued in myself, because I am human and want to live. It is something that is to be valued in others as well as in myself, and that is what fraternity is about.

Thanks to granting people liberty and and thanks to people from various countries migrating to the United States, it became a pluralist country, in which people of different cultures lived side-by-side. By adopting similar values and allowing for immigration, European countries are also becoming more pluralistic. But there are some differences. Much of the immigration to the United States was from Europe, where people already had similar values to the people living in America. But now much of the immigration to Europe is Muslim immigration from the Middle East, and the problem here is that Islam is a monoculture that seeks to replace European culture rather than to coexist peacefully with it.

To survive against the monoculturalism of Islam, multiculturalism has to recognize itself as a meta-monoculture and insist upon its own spread and dominance over society. It has to enshrine the values of life, liberty, equality, fraternity, and happiness well above the more particular values of particular cultures. If another culture fails to respect these values, multiculturalists have to be willing to reject that particular culture as a bad culture that does not share their core values. In protecting the integrity of multiculturalism, there can be no room for cultural relativism, the idea that right and wrong are cultural matters, not universal matters. A robust multiculturalism has to be grounded in ethics first, and it has to place its ethical principles above the cultural mores of specific cultures. As long as different cultures share the core values I’ve mentioned, they can coexist peacefully despite differences in food, language, traditions, art, music, customs, and religion. But if multiculturalism becomes an open door to cultures that do not share these core values, it sows the seed of its own destruction. 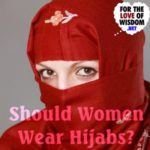