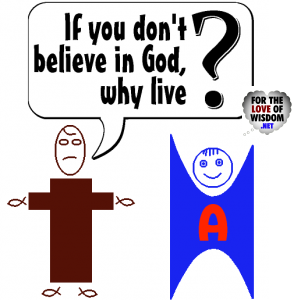 Christians have sometimes asked atheists, If you don’t believe in God, why live? This seems like an odd question. Is life supposed to be such a hardship that it wouldn’t be worth it unless there was some kind of eternal reward to keep going? I’m sure that many people, including both atheists and Christians, find that earthly life offers enough rewards of its own for them to keep going. Most people’s lives just aren’t so bad that they have nothing to live for unless they can hope for eternal life in paradise.

Perhaps the person who would ask this question presumes that life has no meaning without God. In that case, I would direct him to Victor Frankl’s book Man’s Search for Meaning

. This book is about how he survived living in a Nazi concentration camp during the Holocaust and about the qualities that distinguished survivors from others. The main thing distinguishing the survivors was that they felt their lives had meaning. Frankl is a psychologist who has studied how people find meaning in life, and the three main ways he has found are creativity, love, and facing suffering.

Different people are creative in different ways. I create Chess variants, write computer programs, make videos, and write essays. Other people paint, sew, write novels, compose music, produce movies, etc. If you have a creative outlet, whatever it may be, then you should understand how engaging in this enhances the meaningfulness of your life. Ask yourself, this: If you got to go to Heaven, but you couldn’t be creative there, would it still be Heaven to you? As a creative person, I find that creativity is such an important part of who I am, and it is not something I would want to give up.

Most people have someone they love. Even if you’re not in a romantic relationship, you may still love someone from afar. And if you don’t love anyone at all, and you’re not a psychopath, then you may be despondent that you can’t find anyone to love. Or perhaps you may focus your love on taking care of animals. There is a natural impulse in humans to love and to be loved. Loving other people, doing things for them, and holding onto life for them are all things people do to make their lives more meaningful. Loving God might help a person’s life feel more meaningful, but there are so many actual people in the world to love that people without any belief in God are not left without being able to love anyone.

Facing suffering can also give people’s lives meaning. This is something Frankl probably both experienced and witnessed while in a concentration camp. Going on despite suffering can require strength and dignity, and maintaining these can give one’s life greater meaning. It’s true that belief in God or hope in an afterlife can help give people the strength and dignity they need to face suffering, but they are not required for it. Valuing one’s dignity, setting an example for others, or refusing to give up can all motivate a person to be willing to face suffering. Also, being able to find joy in life despite the suffering can also motivate someone to continue facing it.

Since creativity, love, and facing suffering are all available to atheists, their lives can be meaningful. Perhaps another assumption the person asking the question makes is that without God, life has no value. I disagree with this, and I will be arguing here that each human life has inherent worth and dignity.

As Albert Camus has mentioned in The Myth of Sisyphus

This sometimes takes a wrong turn when people who have an impoverished sense of love believe in a wrathful God who shows his love for them by sparing them from the punishment he is going to inflict on others. Unfortunately, finding your sense of value by believing that you are part of a chosen people is all too common among world religions. It is also the basis of almost every cult.

But atheists deny that our lives derive any value from God. Besides that, value derived from serving God is only instrumental value anyway. Why live unless my life actually has its own intrinsic value?

When it comes down to it, the idea that we get our value from God seems disingenuous. Even theists love God on the grounds that he will grant them immortality and eternal bliss. They value their own lives first, and they believe in a God who serves that value.

Would anyone love a God who would consign everyone to eternal torment? Yet if only God has intrinsic value, what would be wrong with this? When Christians say that man was created in the image of God, this may mean that like God, each human life has intrinsic value. This is not value that is derived from God, but value that is inherent in each individual life. My life is valuable to me, regardless of what purpose it can serve for anyone else. My life is not simply valued by something else; it is self-valuing.

But the value I place on my life is not mere subjective value. To value anything at all, including what is of real value, I must value my life. It is the prerequisite value for me to value anything else at all.

Objective value is what is of real value to me, regardless of whether I recognize it. Nothing can have objective value to me unless my life has real value. But the value of my life does not depend upon anything else–not on public acclaim, not on God’s love, not on any purpose my life may serve.

My subjective values may change as I change my mind or my tastes. What is objectively of value to me may change with my circumstances. But the value my life has to me will never change. It is an absolute value.

The value of my life is absolute. It is the foundation that allows anything else to be of objective value to me. I cannot subjectively value a thing without first valuing my own life. I value my life regardless of what purpose it may serve or what use it may be put to. Therefore, my life has intrinsic value.

The first principle of Unitarian Universalism is to affirm and promote the inherent worth and dignity of every person. This may be understood as what I’ve been calling intrinsic value. One version of Kant’s categorical imperative says, Act in such a way that you treat humanity, whether in your own person or in the person of any other, never merely as a means to an end, but always at the same time as an end. This is the same idea. To have intrinsic value is to be an end, not just a means. Treating another as an end is recognition that this person’s life has intrinsic value, not just instrumental value.

When we recognize our own inherent worth and dignity, we become more survival-oriented. This makes us more enthusiastic, less apathetic, and more inclined to fight for what matters to us, especially life itself. If we treat ourselves as ends, as people with inherent worth and dignity, we cannot live as second-handers. I first came across the idea of the second-hander in Ayn Rand’s novel The Fountainhead

, though all quotations about it in The Ayn Rand Lexicon: Objectivism from A to Z

When you recognize the inherent worth and dignity of others, you also recognize that other people matter, and you can find genuine value in doing things for others. Beyond the intrinsic value of your own life, this provides additional reasons to go on living. So, to answer the original question, life is worth living regardless of its duration, regardless of its effects on anyone else. Life is worth living entirely for its own sake, and it is what makes everything else worthwhile. Why live if there is no God? For the same reason I would if there were a God. My life inherently matters.