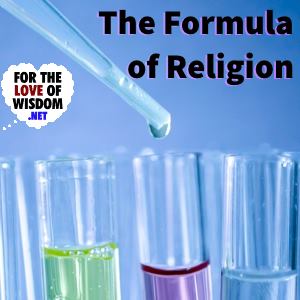 If you have ever watched several TV shows in the same genre, you might have noticed a formula. For example, I have watched several romantic comedies from South Korea, and they share a common formula. A young woman wins the love of two men. One serves as a protector, helping her through the troubles she faces during the course of the drama, and the other one is the one she ends up with. In the same sense that shows in the same genre often follow the same formula, religions tend to follow the same formula too. There is a formula to religion, and numerous, maybe even all, religions follow it.

Here is the formula of religion:
1) PROBLEM: What is it that is wrong?
2) EXPLANATION: Why do we have this problem?
3) SOLUTION: What can we do to solve the problem?
4) OUTCOME: How will this fix things?

Since the formula is concisely followed in the Four Noble Truths of Buddhism, I will begin with it as the first example:

Since most of the audience may be Christian or from a Christian background, I’ll continue with the example of Christianity.

1) PROBLEM: There is death and suffering.
2) EXPLANATION: Death and suffering are punishments from God for our sin.
3) SOLUTION: Repent of your sins and seek God’s forgiveness.*
4) OUTCOME: God will grant you eternal life and eternal bliss in Heaven.

*Note that various denominations of Christianity differ on how to do this. Catholicism emphasizes confession to priests and acts of penance. Protestants tends to emphasize faith in Jesus. Methodists put more of an emphasis on works than some other denominations do. Some Protestants emphasize the importance of being born again.

Because of the diversity among Christian denominations, some follow a different version of the formula. Here are a few examples:

Christian Science
1) PROBLEM: There is death and suffering.
2) EXPLANATION: We have created a false reality for ourselves in which death and suffering seem to exist.
3) SOLUTION: Have faith that God is looking out for us and evil isn’t real.
4) OUTCOME: We will find that the evils we suffer from are not real.

Mormonism
1) PROBLEM: There is death and suffering.
2) EXPLANATION: We have not yet achieved godhood.
3) SOLUTION: Follow Mormonism.*
4) OUTCOME: We will become gods.

*I’m foggy on the details of Mormonism, since I don’t come from a Mormon background. I know it involves such things as missionary work, charity work, and sometimes polygamy.

Judaism
1) PROBLEM: Israel is a weak nation, or conquered, or dispersed, and its people suffer from various woes, including at times prejudice and genocide.
2) EXPLANATION: Even though the Israelites are God’s chosen people, they have turned their back on God.
3) SOLUTION: Follow the ten commandments and other Jewish laws and retain the Jewish heritage.
4) OUTCOME: God will eventually send a messiah to restore Israel to its glory.

Islam
1) PROBLEM: There is death and suffering.
2) EXPLANATION: We have been disobedient to Allah.
3) SOLUTION: Obey Allah in every little detail and structure society according to his law.
4) OUTCOME: We will live in a better society on Earth and enjoy sensual delights in the afterlife.

Hinduism (Reincarnation version)
1) PROBLEM: We suffer in life.
2) EXPLANATION: We have collected bad karma through bad deeds done in this and previous lives.
3) SOLUTION: Work off bad karma through good deeds.
4) OUTCOME: We will suffer less from bad karma and live better lives when we come back again.

Hinduism (Pantheism version)
1) PROBLEM: We suffer and die.
2) EXPLANATION: We are ignorant of our true nature as God and experience a world of illusion (maya).
3) SOLUTION: Seek God within ourselves.
4) OUTCOME: We will throw off the illusory self and remember that we are really God.

Taoism
1) PROBLEM: There is evil in the world.
2) EXPLANATION: We artificially divide the world into polar opposites, such as good and evil, light and dark, etc.
3) SOLUTION: Accept the unity of opposites.
4) OUTCOME: We will live beyond the duality of good and evil, pleasure and pain, etc.

It is sometimes charged that atheism is a religion. Does it fit the formula?

Apparently, atheism does not fit the formula and so may not count as a religion. But maybe we can use the formula to describe some of the belief systems popular among atheists.

Secular Humanism
1) PROBLEM: Humans die and suffer.
2) EXPLANATION: As natural beings who are the products of evolution, we are naturally subject to death and suffering. Evolution would have been impossible without death, and feeling pain helps keep us safe from danger.
3) SOLUTION: Take responsibility for our lives, live virtuously, treat each other well, and harness the power of science and technology to improve health and living conditions.
4) OUTCOME: We will live happier lives, help others do the same, and leave a better place for our descendents.

Communism
1) PROBLEM: Workers are oppressed.
2) EXPLANATION: The class struggle between proletariat and the bourgeoisie.
3) SOLUTION: Overthrow the bourgeoisie and turn the means of production over to the proletariat.
4) OUTCOME: This will change human nature and eventually lead to a society in which each person gives according to his ability and takes according to his need.

I could go on with more examples, but I would be covering religions I know less about. What matters now is not that I have gotten every detail right but that I have planted the seed of an idea in your mind. How does this formula fit your religion or the religions you know of? Can you think of any religion that doesn’t fit the formula? If so, what makes it a religion in spite of not fitting the formula?

The Forbidden Fruit May Have Been a Mushroom